The 13th Havana Biennial, the largest visual arts event in Cuba, will be held from April 12 to May 12, 2019, with the commitment that the capital city of the island become a “cultural corridor” in which the creators and the public interact, announced their organizers in April.

Under the general theme “Construction of the Possible” the next edition of the Havana Biennial was presented as a space for those types of contemporary art that interpret creation as a “living event or experience in progress”.

Representatives of the National Council of Visual Arts and the Wifredo Lam Contemporary Art Centre – both institutions of the Ministry of Culture – explained their aim that art “invades the city” during the next Biennial to be held in the year of the 500th anniversary of the founding of the city of Havana.

Although the names of participating artists have not been announced yet, the curatorial team announced that they expected more than 200 artists from 15 to 20 countries, including Portugal, Brazil, Colombia, Argentina, Mexico, France, Peru and Spain.

One of the guiding principles of the Biennial is to encourage interaction between artists, curators, experts and institutions, explained the deputy director of the Wilfredo Lam Centre, Margarita González, at the launch of the event.

González highlighted that in recent Biennials this showcase of art has included a process of continuity in some lines of work that will be maintained in 2019 with projects that have points of contact with other cultural genres such as music, literature and dance.

One of them, “Behind the Wall”, which was included in 2012 and 2015, is proposed next year to cover a larger public space -of about 6 kilometres of street – where artworks will be installed in order to “make art a daily act, “explained the promoter of ‘Behind the Wall’ project, Juan Delgado.

For this, he said they are looking to include important artists who reflect their identity and who are linked to Havana, such as Peruvian Grimanesa Amorós, and, it is anticipated, Mexicans Javier Marín and José Dávila, together with recognized Spanish graffiti artists.

The main curator of the Biennial, Nelson Herrera, said that they hope to include between 15 and 20 artists of the island that contribute to give that image that “there is also a very strong Cuban art”.

In addition, it was announced that in 2019 the event will be extended for the first time outside of Havana – its usual headquarters since 1984 – to reach other provinces of the Caribbean country such as Matanzas (west), Cienfuegos, Sancti Spíritus (central) and Camagüey (east central).

The 13th Biennial was originally scheduled for the last quarter of this year, but after the devastating passage of Hurricane Irma for Cuba, in September 2017, its organizers announced the decision to postpone it for 2019 due to the “very serious damages” caused by Irma.

Link to original report in Spanish 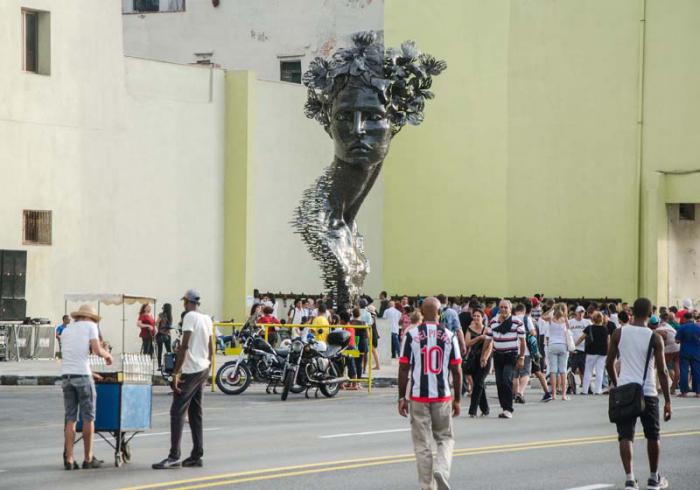 About the Havana Biennial

The Havana Biennial was established in 1984 and its first edition was dedicated to artists of Latin America and the Caribbean. Since the second Biennial of 1986, also artists from Africa, Asia and the Middle East have taken part. This tradition, which has remained during each of the subsequent editions, turned Havana into an important venue for the gathering and exhibition of ‘non-Western’ art. The Havana Biennial has focused its attention on the artists from the South whose works represent concerns and conflicts – many times of universal scope – that are common to their regions.

Issues like the existing tensions between tradition and contemporariness, the challenge to the historical colonization processes, relations between art and society, the individual and his/her memory, human communication in the face of technological development and the dynamics of urban culture have been topics of particular interest in the Biennial, without distinction among the multiple forms of visuality that operate in culture as a system.

During its development the Havana Biennial has acknowledged the geopolitical reconfiguration that has occurred and consequently the increase in the number of countries that approach the conditions of the so-called South and those that, in precarious positions of development, aim at inserting themselves in the economic blocks of more favored countries.

Now, the Havana Biennial takes place within an allegedly globalized world that appears with many faces, complexities and conflicts, particularly when the discourse referred to it tends to arrange in order of importance the economic hegemony, the dependence and the control of information, ignoring the different stages of development and the socio- political orientations that coexist in the planet.

The Havana Biennial is organized on the basis of a research and curatorial process, and all participants are selected according to certain parameters such as the thematic-conceptual subjection to the theme of reflection. In this process the curatorial team of the biennial, from the Wifredo Lam Contemporary Art Center in Havana receives the support of colleagues from other countries who contribute with their suggestions and become the necessary links in the dialogue with the creators.