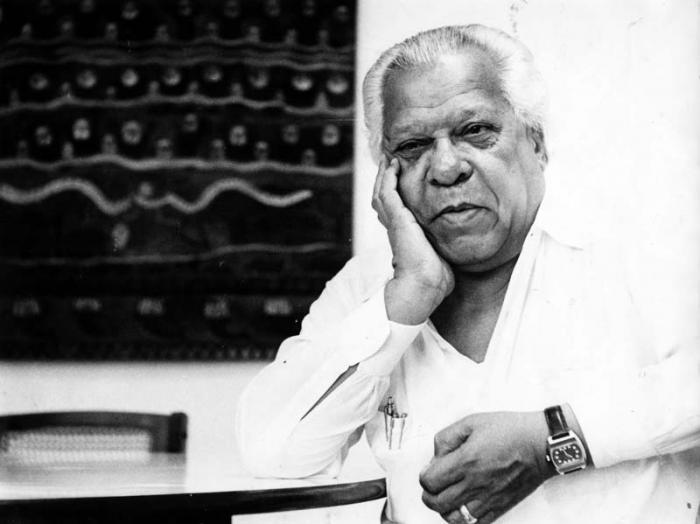 Nicolas Guillen was born 1902 in Camaguey, Cuba, and died 1989. He was an Afro Cuban poet, writer, journalist, and social activist. Best known as the National Poet of Cuba.

His parents were both of mixed African-Spanish decent. Guillen’s father, a journalist, introduced him to Afro-Cuban music when he was very young. His father was assassinated by the government, and as Nicolas and his brothers and sister finished school in pre- revolutionary Cuba, they encountered the same racism Black Americans lived with at the time.

Guillen began writing about the social problems experienced by black people in the 1920s. His first poems were published in a local magazine in 1922,. In 1929, Guillen interviewed Langston Hughes, the African American writer and activist, in Havana, whom he deeply admired, and they became lifelong friends.

In 1930, Guillen created an international stir with the publication of “Motivos de son,” eight short poems inspired by the Son, a popular Afro-Cuban musical form, and the daily living conditions of Cuban black people. Composed in Afro-Cuban vernacular, the collection separated itself from the Spanish literary canon and established Black culture as a legitimate focus of Cuban literature. It was as if Guillen had touched on something that the people of Cuba could recognize as having been on the tips of their tongues waiting for Guillen to articulate. Like Hughes, he believed that the Black artist must be free to “express our individual dark-skinned selves without shame.”

Guillen was as much a political activist as a poet. In 1937, he travelled to Spain as a delegate to the Second International Congress of Writers for the Defence of Culture. In an address before the congress he condemned fascism and reaffirmed his Black roots. In 1940, he ran for mayor of Camaguey and in 1948, Guillen was a senatorial candidate for the Cuban Communist Party; both campaigns were unsuccessful. His identification with the plight of Black people beyond his native Cuba is reflected in his “Elegias” (1958). Upon his return to Cuba in 1959, Fidel Castro awarded him the task of designing a new cultural policy and setting up the Union of Writers and Artists of Cuba (UNEAC), of which Guillen became president in 1961.

His works have been translated into more than 25 languages.

After his death, in 1991 the Nicolas Guillen Foundation was established in Cuba to contribute to the preservation, study and promotion of the literary, cultural and human legend of Nicolás Guillén.