In 2008, Cuba Solidarity Campaign launched the Cuba50.org website as a hub for any event, large or small in the UK that aims to celebrate the best of Cuban culture and talent. In 2009 the Campaign launched a year long festival across Britain to celebrate Cuban culture in the 50th year of the Cuban revolution. It was under the banner Cuba50 – celebrating Cuban Culture, and had the support of many organisations and individuals.

The festival also included a showcase of Cuban cinema, old and new at the Barbican cinema, and talks including Aleida Guevara (daughter of Che Guevara), Mariela Castro (director of CENESEX and campaigner on LGBT rights in Cuba) and top Cuban Film director Juan Carlos Tabio (co-director of iconic film ‘Strawberry and Chocolate’). 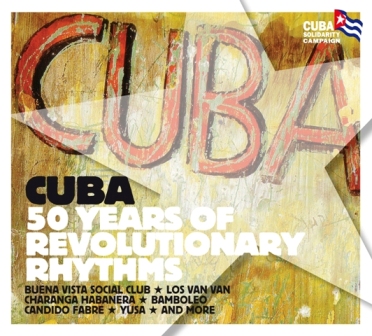 Over the last 10 years Cuba Solidarity Campaign via the Cuba50 project has continued to encourage people to find out more about Cuban culture through the website news, reviews, and promotion of events around the UK, involving Cuban artists and musicians living in Cuba and in the UK.

We have worked with international projects such as Havana Cultura, major venues, music, film and dance festivals across the country and helped promote Cuban cultural excellence wherever we can.

This renovated site continues that celebration. People across the world have come to love Cuba through seeing and experiencing the island’s culture, born of hundreds of years of history and a rich mix of cultures.

If you would like to write an article, promote your Cuban cultural event or advertise with us please get in touch. office (at) Cuba50.org

Cuba50 is a project of Cuba Solidarity Campaign in the UK.

‘My painting is an act of decolonization not in a physical sense, but in a mental one’.
After 1959 in Cuba "the new government sought to develop a program to mass-produce new housing, schools and factories...Architects realized they needed to do more with less and invent new construction methods using local materials..." Read this fascinating article at https://Cuba50.org about revolutionary architecture.
Sunday 28 November 8pm Cuban time, (mon 29 November 1am uk time) livestreamed on facebook - catch the film 'Mi Primera Tarea' about Cuban nueva trova singer-songwriter Silvio Rodriguez and his experience of being part of a literacy brigade in 1961 in Cuba as a youth teaching people to read.
Congratulations to Cuban musicians Orquesta Aragon de Cuba, Issac Delgado and Alain Pérez for winning a Latin Grammy in the Best Traditional Tropical Album category for their brilliant cd 'Cha Cha Cha - homage to the traditional'.
Havana ranked fourth in the category of Most Desirable Cities, in the Travel Awards 2021 compiled by the British travel magazine Wanderlust, it reported this week.
The 14th Havana Biennial of contemporary art has opened this weekend and is set to develop over 3 phases up to 30 April 2022, with themes of decolonisation, ecology and sustainability, our place in the digital world and much more. Hundreds of artists, curators and art specialists are participating from all over the world. Read more about it on our website (link in bio) and some of the events coming up in the first phase and how to access the programme.