Internationally acclaimed Cuban violinist Omar Puente is performing a special show in London this November in memory of his wife Debbie Purdy. He talked to CubaSí magazine about Debbie, his life, musical influences and current projects

Omar Puente was born in Santiago de Cuba in the 1960s and has lived in the UK for 22 years. He was married to Debbie Purdy, a British political activist and assisted suicide campaigner, and is organising a special show in her memory in November.

How did you become a musician?

My father was a doctor, my mother a nurse. My father used to play violin, not brilliantly but well enough to pay for his medical training (before the Revolution).  I think it inspired me to see him play. My father said if you learn the name of this string I will give you a candy when I come back. I named the string and got the candy.

From age 8 I went to Esteban Salás Conservatory School in Santiago, a state school with music specialism.  In the morning you did maths and geography, in the afternoon, violin and harmony. At age 13 I went to ENA (Escuela Nacional de Arte) in Havana, then to ISA (Instituto Superior de Arte) at age 18 for five years. ISA is for all arts, not just music, and the quality of teaching was high. There were very good Russian classical music teachers who taught the right technique, the right way to practise. So we had the classical background and also Cuban music.

ISA produces great musicians – my contemporaries were Miguel ‘Angá’ Díaz, Oriente Lopez, a flute player, and Gonzalito Rubalcaba, who was one or two years younger than me, like Omar Sosa. We were very lucky. We were alongside students of painting, dance, ballet, batá drums, theatre, and everyone had an influence. I was playing Prokofiev, Bach, but also music from Brazil and the Beatles, and jazz tapes were passed around of Charlie Parker, John Coltrane, and Oscar Peterson.  In 1979 I saw the band Weather Report at the Karl Marx theatre – that concert changed my life.  They were excellent jazz musicians but influenced by African rhythms, plus jazz with electric and rock elements. I knew I wanted to make people feel the way I felt at that moment.

For some years now you have also taught music in Britain. Is music taught differently in Cuba to here?

Well, here you have to teach the particular syllabus for the particular exam board. So I combine the syllabus I am given with some of my own exercises that I learned back in Cuba, that I believe can really help musical development. To learn to play jazz you not only have to look at the syllabus but you also have to learn self-expression and I can share my experience with the students.

Some years ago, I wrote the book ‘Play the Violin the Cuban Way’ with jazz pianist Alex Wilson between concerts – and I use this book in my teaching.

What is new for me has been teaching 30 primary school kids at once! You have to be very well prepared, to keep their attention and stopping them doing the Floss dance takes a lot! You have to be really precise and teach self-discipline, which is useful not just for music. It’s great when you see their faces when they open the case for the first time: wow! And now some of those kids are playing in an orchestra, getting scholarships. This is one of the greatest feelings you can imagine. I also play for them a lot – classical, Cuban, jazz. I explain the different kinds of music, different instruments, harmony, tuning –  it gives them a grounding, whether they want to be an R&B singer or a celloist.

So teaching has become a big part of your life?

This new chapter has given me the chance to pass on my knowledge to the new generation. I have school students who now hold the instrument just like I do. My visually impaired student says: how can I sound like you? I have a Hungarian student who has a very sharp ear – we work to build his jazz vocabulary.  He wants to go to another level. I try to give what I can. I am a very lucky man.

Has your music changed?

Everything changes. When I was younger and I played solo there were a lot of notes but not so many now. I like living in the UK because it is so multicultural – there are so many influences combined with my travels that have affected my music. Personal emotions, sadness, change the music. The musicians I played with also changed how I play.

I had the opportunity to play with some of the greatest artists in Cuba when I was younger: Rubén González, Cachao, Orquesta Enrique Jorrín, Rubalcaba. I learned to play danzón from Gustavo Tamayo, one of the greatest guiro players – he wasn’t able to read music but he knew danzón. I played trova in Santiago de Cuba, I spent time in Asia, toured Japan, Brazil. Every country, every culture gives me something and at some moment – click – it’s there in my music. I went to Morocco – which led me to write ‘Morning in Morocco’. Anywhere you go in Africa, especially Nigeria, us Cubans are so close to those people, it’s the legacy of slavery. I don’t know precisely where my ancestors come from, but with all this travelling, sitting back on the bus talking to other musicians, playing with Dennis Rollins, Soweto Kinch, and with other Cubans, I have absorbed a lot. But my Cuban roots are still there.

What are your current projects?

I needed a challenge and now I have two new albums ready to record: one inspired by John Coltrane in a way never done before, the other is back to my Cuban Charanga style but with Moroccan influences. I haven’t decided which way to go yet. The whole process of making an album doesn’t happen overnight. You need time to record, so it is step by step. Next year I will concentrate on it.

Clasico Latino is another project I have been working with – it is all Cuban music with classical input on piano, cello and violin.

What music are you listening to?

All kinds. Traditional and modern Cuban music, old jazz, contemporary music, classical, African, R&B, a little Reggueton. You have to listen to what’s going on. There is a young Cuban jazz drummer Ruly Herrera, and also a young pianist, Rolando Luna, who has worked with Omara Portuondo. These young guys have developed a really interesting way to play – combining Cuban music with other influences. Of course I listen to John Coltrane and Miles Davis. I still love Kool and the Gang. And of course Los Van Van!

Tell us about your special concert.

This November I am doing a concert celebrating the life of Debbie – my wife – it is the right time now I believe, almost five years since she died. I want to do it not only because she was my wife but because of what she did, not only for herself but also for the rest of society, for her cause (the right to assisted dying). Debbie was a strong woman: even in a wheelchair she could raise her voice and people listened to her. On this subject of the right to die, all I can say is that you have to be in that position to really understand it.

The concert is part of the prestigious London Jazz Festival. I am inviting musician friends to perform with me like Courtney Pine, Alex Wilson, Clasico Latino project, Dennis Rollins and lots more. I hope it will be a big celebration, which is what she deserves.

How have you survived the last five years since losing Debbie?

That’s a tough one. Let’s call this a new chapter in my life. When we were together we argued every day, but I loved that woman. She was the brain – always there, organising everything. I leaned heavily on her and she on me. So when she died there was an empty hole in my life. Every corner of England has a memory for me of being with Debbie. It took me a long time to decide the next step. People say, just wait until you’re ready. Coming back to an empty house was really tough. Debbie’s family were a great support and so were other friends. But I had to decide what to do next.

I wrote the music for my last album, before Debbie died, during one of the most difficult times – thank God we have music and the violin to channel all the emotion into the music! But after she died I didn’t feel like playing or writing music. I would hear a sound like her mobile ringtone and just think of Debbie. I applied for music teaching jobs but eventually I moved from Bradford to London. Debbie had said to me, whatever happens, just keep going, like the title of my album ‘Best Foot Forward’.

How important do you think solidarity with Cuba is?

The labour and trade union movement has been really supportive in the bad times for Cuba – I appreciate that – it’s my country. Cuba Solidarity Campaign has always been supportive to me and I have been supportive to it. Sometimes people have an idea about Cuba and you have to put the other side. CSC is always there to say no, it’s not like that – it’s like this. CSC’s role is very important.

Get tickets for the show: 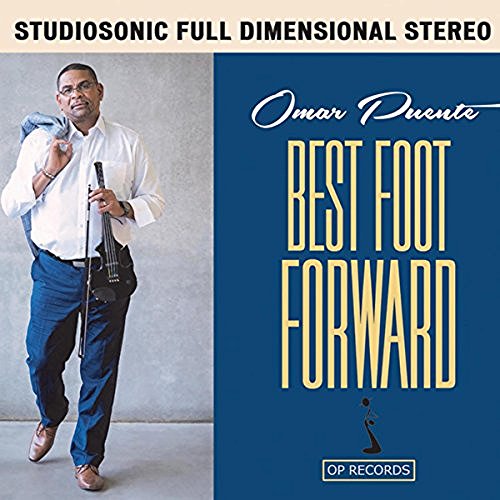