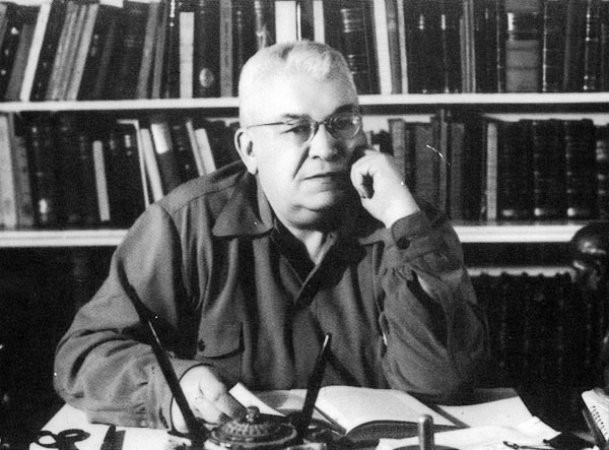 The work of Cuban anthropologist Fernando Ortiz was declared National Cultural Heritage, an act that commits the State and its institutions to ensure preservation, promotion and dissemination among current and future generations.

Gladys Collazo, president of the National Council of Cultural Heritage, made the declaration public in a ceremony that took place this July in the San Gerónimo University College, in the historic centre of Havana, on the 138th anniversary of the birth of the author of ‘Cuban Counterpoint: tobacco and sugar’.

Directly involved with the valuable legacy of Ortiz are the José Martí National Library, the Institute of Literature and Linguistics, the Casa de Africa, the National Museum of Music and the Fernando Ortiz Foundation, whose president, the poet and ethnologist Miguel Barnet, described his contributions as the most extraordinary in the field of Cuban Social Sciences throughout the twentieth century.

Barnet’s dedication to the study and dissemination of Ortiz’s work was extolled by Eusebio Leal, the Historian of the City of Havana, and host of the event.

Dr. Eduardo Torres-Cuevas explained how Ortiz’s work formed the compass for young scientists and intellectuals, while Dr. Nuria Gregori highlighted the work of librarians, technicians and archivists, both in the Institute of Literature and Linguistics as in the National Library, in the care and cataloguing of the tens of thousands of manuscripts and typescripts, as well as other important documents, which are part of the legacy of Fernando Ortiz.

About the keywork by Fernando Ortiz: Cuban Counterpoint: Tobacco and Sugar

“The first and only comprehensive study of the West Indian people. Ortiz ushered the Caribbean into the thought of the twentieth century and kept it there.”

First published in 1940, Fernando Ortiz’s classic work, Cuban Counterpoint is recognized as one of the most important books of Latin American and Caribbean intellectual history. Ortiz’s examination of the impact of sugar and tobacco on Cuban society is unquestionably the cornerstone of Cuban studies and a key source for work on Caribbean culture generally. Though written 80 years ago, Ortiz’s study of the formation of a national culture in this region has significant implications for contemporary postcolonial studies.

Ortiz presents his understanding of Cuban history in two complementary sections written in contrasting styles: a playful allegorical tale narrated as a counterpoint between tobacco and sugar and a historical analysis of their development as the central agricultural products of the Cuban economy. Treating tobacco and sugar both as agricultural commodities and as social characters in a historical process, he examines changes in their roles as the result of transculturation. His work shows how transculturation, a critical category Ortiz developed to grasp the complex transformation of cultures brought together in the crucible of colonial and imperial histories, can be used to illuminate not only the history of Cuba, but, more generally, that of America as well.

Extracted from a review of the book here

“Fernando Ortiz is recognized today as one of the most influential Latin American authors of the 20th century. Amazingly prolific, his publications written between the 1890s and the mid-1950s engage with a vast array of subjects and disciplines. Perhaps Ortiz’s most significant accomplishments were the creation of the field of Afro-Cuban studies and major early contributions to the emergent field of Afro-diasporic studies. Almost everyone else associated with similar research began their investigations decades after Ortiz and in dialogue with his work. Ortiz was one of the first to seriously examine slave and post-abolition black cultures in Cuba. His studies became central to new and more positive discourses surrounding African-derived expression in the mid-20th century that embraced it as national expression for the first time in Latin America.”

[Educated in the European racial determinist canon of anthropology, having initially studied law and criminology, his early research would now be considered racist but there were gradual, progressive changes in his attitudes as he rejected those views.]

“… His writings on black heritage provide insight into the struggles within New World societies to overcome the racial/evolutionist ideologies that justified colonial subjugation. His scholarship resonates with broader debates throughout the Americas over the meanings of racial pluralism and the legacy of slavery. And his changing views over the years outline the trajectory of modern Western thought as regards Africa and race, specifically the contributions of Afro-diasporic peoples, histories, and cultures to New World societies.”

Extracts from essay by US academic Robin Moore here

Catch a special screening on 29 October from 35mm film of the documentary ‘Buena Vista Social Club’ to mark the 25th anniversary of the release of the original album.
Today Cubans start to celebrate their National Day of Culture 10-20 October.
4th GOLD FOR CUBA! 🏅🇨🇺
Another gold for Cuba! 🏅🇨🇺
Two gold medals for Cuba at the Paralympics yesterday 🇨🇺🇨🇺🏅🏅
Maestro Adalberto Álvarez, the "Caballero del Son" and icon of Cuban popular dance music, has died in Havana. He was a giant in Cuban culture only recently having spearheaded the first national day of Son music in May 2021, and performed concerts shoen on TV in Cuba and online during the pandemic.