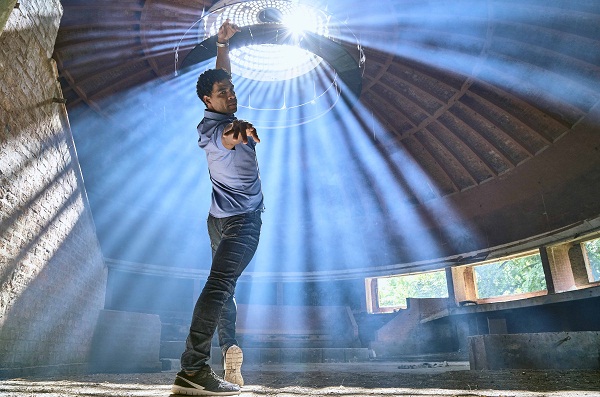 Carlos Acosta talked with Cuban media Juventud Rebelde about his new film Yuli being presented in Havana as part of this December’s 40th International Festival of New Latin American Cinema.

“Carlos Acosta? Here? No, nobody with that name lives here”. That is what used to happen when someone arrived in his old neighbourhood asking about the celebrated dancer, who last October was awarded the Queen Elizabeth II Coronation Award, by the Royal Academy of Dance in the UK, for being one of the most influential figures in contemporary dance and inspiration for dancers around the world.

So, if you wanted to quickly track down the director and founder of Acosta Danza, you would have to ask for “Yuli”, which ultimately became the title of the film, which was being screened at the Havana film festival this week.

Carlos does not know for sure how his nickname came about. As he told JR, there are two versions. “My father claimed that he gave me that name, because I used to say there was a warrior Indian of the Sioux tribe of North America, who was always beside me and protected me and I used to talk to. However, my sister Bertha insists that it was she who gave me that name … The truth is that until not long ago, nobody knew me as Carlos Acosta, I was always ‘Yuli’ “.

It was the welcome given to his autobiography ‘No Way Home’ that prompted the birth of this film project. “When I published the book in England it was almost a bestseller. One day I was approached by a producer telling me that the text had a lot of cinematic value, that there was a movie in it, and that planted a seed in my head. With this producer we started working on the project, but then everything collapsed.

“Then Debs Gardner-Paterson came to me, after having made her first film Africa United with a very low budget, which ended up being very successful, about Rwandan children who decide to cross several countries and travel thousands of kilometres to watch the football World Cup. Gardner-Paterson was very interested in my story, but she could not make the film; so she put me in touch with Andrea Calderwood, who ended up being Yuli‘s producer.

“I had so much good luck – when I presented the project to Tony Hall, former director of the Royal Opera House and my former boss, who was heading the BBC by then, he said to me: “For you it will happen “. This is how we got the funds to get the script written. We hired a Hollywood scriptwriter, but it did not work out. Then Paul Laverty appeared, a really special person, and a regular contributor to the renowned British director Ken Loach (he worked on ‘The wind that shakes the barley‘ and ‘I, Daniel Blake’, both Palme d’Or awardwinners).

“We connected after I saw the documentary ‘Full Circles’ that was about my dream of renovating part of the famous buildings of the National School of Art to create a teaching centre for dancers around the world with low resources. We met up, he loved the idea, he told me where the project could go, he came to Havana, BBC financing came too … That was when he told me about his wife, who he works with.  And his wife turned out to be the great filmmaker Iciar Bollaín (‘Flowers from another world’, ‘I give you my eyes’, ‘also the rain’). I suddenly realized that ‘Yuli’ was never going to be in better hands.

“I confess that I worried a bit when they told me that they wanted me to perform in the film too. At that time I thought: “No, you don’t have many opportunities to tell your story, and what if now I’m the one who spoils it?”, But they convinced me that I could do it perfectly. In two years the movie was ready.”

JR- Are you satisfied with the result?

“ It may sound ugly to say it, but in my opinion it is a work of art. It is not a “Once upon a time …” type of story. No no. I think it’s a film that transcends the artistic. Yuli breaks conventions, firstly because I am involved in it with my life on my back, but it is not a documentary, it is a fiction. And then the choreography, the dance as protagonist, the beautiful music of Alberto Iglesias, the fabulous photography by Alex Catalán, the very credible performances of Keyvin Martínez, the child Edilson Manuel Olvera, Laura de la Uz, Acosta Danza … the maestro Santiago Alfonso playing my father, is a very convincing character, although a little bit softer because my real father was stricter [Carlos smiles].

“It is not the same as ‘No Way Home’, my book, but a film that feeds on some of its passages. It would have been easier to use a tried and tested formula, following in the footsteps of Billy Elliot, for example, but this is a very comprehensive film, with the spirit to innovate, I find it difficult to think Yuli might not be liked.

JR-How has Yuli been received internationally?

-Well, very good. We are very happy with the Concha de Plata (Silver Shell) that it received [in October] at San Sebastian film festival for Best Screenplay, although I think there is no greater feeling than witnessing 2,000 people standing up applauding the film for 15 minutes. At times like that I can’t help but cry.

“The Goya film award nominations will be announced soon, and we will see what fate has in store for us, but the competition is strong for films like Champions, very nice, tender and right now is taking over in Spain, because it has stolen the hearts of the people.  But we are not scared. Yuli is also connecting with the public by establishing itself as a story of the triumph of humility over adversity. My greatest wish is that it be an inspiration for other Cubans, full of encouragement, saying to my brothers that yes, results only come from hard work, do not give up in pursuit of our goals, our dreams”.

JR-Your company Acosta Danza was founded three years and three months ago. How is it doing so far?

-Spectacularly! We have achieved what seems almost impossible in three years, especially since we started from scratch. I remember when we started in a room lent by the National School of Ballet, where we met from four in the afternoon, all tight but eager to devour the world. From the level that has been reached you get the impression that Acosta Danza has been going for 20 years. Of course, it has been possible due to the extraordinary team that accompanies me, that follows me in my madness, with the good energy that they breathe; because we are all one at the time of launching the project, with a high sense of belonging in every member of this company. It’s great when everyone makes every new idea their own.

“That’s right, and we’re looking forward to it. It is a unique show that we prepared for the first time for the dance students of the Academy (created in 2017), who will bring to the stage works such as Belles Lettres, by Justin Peck; Majísimo, by Jorge García; The waltz of the flowers of the Cascanueces and scenes of Tocororo.

“Our Teaching element emerged with the aim of complementing what already exists and with the desire to contribute to the renowned tradition of our country in the training of dancers. Our aim is to work for Cuba, this is not a private project: Acosta Danza works for the good of the nation.

“In our Academy, there are not only Cuban young people, but also foreigners of great talent, but who are unable to afford their studies, their education in their respective countries. I see it as another legacy of Cuba for the world. Here we have received young people with a very tight economic situation, and one feels happy, satisfied, to discover the intensity with which those eyes now shine. Right now, we have a Dominican, three Colombians and two Spaniards.

“As regards Cuban students, we have carried out this selection process at a national level, looking for those with the greatest artistic talent and technical conditions to qualify to enrol. The first students, now in their second year, number 11: one from Havana and ten from other provinces, to whom we wanted to give this opportunity to train as professionals capable of facing the demands of any choreographer, with high aesthetic and ethical values. In the first year there are 20 students, that is, 14 Cubans and the six foreigners that I mentioned.

“Although those who attended Carmen’s most recent performances in the García Lorca hall of the Gran Teatro de La Habana Alicia Alonso appreciated a preview of where we are going with our students, the concert programme that we propose for this Monday will reveal the rigor with which we are working.

-“Very intense and full of light and art: we have works choregraphed by Marianela Boan, Goyo Montero; Juanjo Arqués, resident choreographer of the Dutch National Ballet; a gala tribute to the superprofessor we all love, Ramona de Sáa, for her high contribution to Cuban culture; workshops with Pepe Hevia, tours of the UK, Spain … And we will do everything possible to be back performing in Cuba in the fall of 2019.

“But 2018 is almost finished, we will say goodbye, before taking a deserved vacation, at the film festival’s closing gala, with a dance embrace.”

Watch the trailer for YULI

Carlos Acosta fans!
20 years ago this week Alberto Korda recognized as one of the great Cuban photographers of the Revolution, passed away. His most famous work is the portrait of Che Guevara, one of the most reproduced images in the history of photography.
A new documentary about rock band Blondie's recent visit to Cuba is set to make its debut at this year’s Sheffield Doc Fest.
On the eve of Cuba's very first national Day of Cuban Son music, 'Al Son del Caballero' a fabulous compilation of the best of Cuban contemporary dance bands is now available on various digital platforms. Thanks to Bis Music/Artex and son maestro, Adalberto Alvarez, who has led the campaign to celebrate the special day 8 May.
This May 8 Cuba will celebrate its first national Day of Cuban Son, in homage to this music-dance form and the musical legacy of its great exponents, Miguel Matamoros and Miguelito Cuní, who were both born around 8 May.
Carlos Acosta fans! Tickets go on sale today Tue 4 May for Carlos's live show 'on before' at Norwich Theatre Royal in July. A mini UK tour for July-August is announced!!