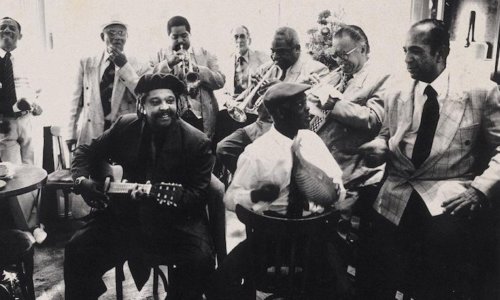 One of the bands that introduced Afro-Cuban music to the world bring together the full spectrum of the Latin dance sound – and shape its future.

Led by Juan de Marcos González, the Afro-Cuban All Stars features mainstays of the Havana music scene, alongside a younger generation. In a rare London appearance, they perform songs old and new, as music from the golden era of Cuban music is revived and refreshed with the incorporation of contemporary sounds and rhythms.

Originating in the mid-1990s, the Afro-Cuban All Stars were founded by González to celebrate the heritage of pre-revolutionary Cuban music. With the support of UK label World Circuit Records and roots guitarist Ry Cooder, they headed to the studio to record a trio of albums – A Toda Cuba le Gusta, Buena Vista Social Club and Introducing…Rubén González. The records, and the accompanying documentary film by Wim Wenders also entitled Buena Vista Social Club were instrumental in popularising Cuban music worldwide.

4th GOLD MEDAL FOR CUBA
On a day like this 100 years ago Ñico Rojas was born. Rojas became a prominent Cuban composer and guitarist, considered one of the founders of a style of Cuban song called filin. Today in Cuba his music and legacy are being celebrated.
38-year-old Cuban Mijaín López, known as the 'Gigante de Herredura' (giant of Herredura, his home town in Pinar del Rio), not only won a gold medal for Cuba but also made history this Monday by becoming the only wrestler to win four Olympic titles, after defeating the Georgian Lakobi Kajaia 5-0 in the final of 130 kg mens wrestling.
THIRD GOLD MEDAL FOR CUBA: Cubans Serguey Torres and Fernando Dayán Jorge, achieved a gold medal in the 1,000m 2-seater canoe at #tokyo2021 #Olympics.
Felicidades #Cuba! The Cuban team at the #tokyo2020 #Olympics have now shot up to number 19 in the medals table, with 8 medals in total - only 2nd to Brazil amongst Latin American and Caribbean countries!
Carlos Acosta fans!