‘Sergio & Sergei’ was one of the most anticipated Cuban films of the recent International Festival of New Latin American Cinema. The Cuban director, Ernesto Daranas talked recently about it to Cuban press.

As in ‘Conducta’, Daranas counted on the collaboration of RTV Comercial (UNO, Sonando in Cuba, LCB: The Other War) to make Sergio & Serguéi, a highly ambitious project that takes you to the Mir space station, where, back in 1991, the Soviet cosmonaut Sergei Asimov (Hector Noa) is stranded. Sergei fortuitously establishes a friendship, over radio waves, with Sergio, a Cuban radio amateur (Tomás Cao). The background context to this is that the former Soviet Union (USSR) is disintegrating and the difficult Special Period begins in Cuba.

The space station in which Sergei “floats” and the surrealist levitation of the abhorrent character played by Mario Guerra, among other surprising images, demanded strong post-production work carried out by the team of professionals of the Spanish production company Mediapro, which finished off the preparation work started in Havana, according to the director.

“There really were not as many resources as the screen would have you believe. What we do is to try to make the most of each technical element. We did a lot with few resources, always looking for the best final result, which meant taking great care over the photography (under the command of young Alejandro Menéndez) and art direction (by Maykel Martínez and Laia Colet) , essential elements to make the show, ” said Daranas. 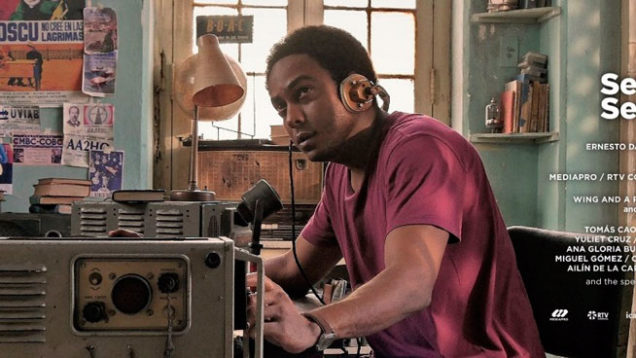 Also collaborating with the producer and director was the American actor Ron Perlman (Beauty and the Beast, On behalf of the rose, Hellboy …), who also honoured the cast with his performance as Peter, an American journalist known for his research on NASA (National Aeronautics and Space Administration of the United States), who maintains communication with Sergio also through the ether.

Daranas explains: “I found it very interesting to discover that for young people, like my daughter who was born in 1990, the memory of that era has a veil of nostalgia, because her childhood was lived out during those years. The idea attracted me because it was a way to approach youth and also for us, the older ones, to distance ourselves and return to the Special Period, pointing out events that could be useful to understand the present “.

Where does the idea for the story come from?
“The story has been in my head for many years. In the ’80s I heard about a group of Cuban radio amateurs who had contacted the Mir space station, and later I found out about the astronaut Sergei Krikaliov, who was on that ship at the moment when the Soviet Union became Russia. This man was almost forgotten in space because the space program of the extinct country was falling apart. Then it occurred to me to unite these two elements and think about what would happen if I put the two together in contact with each other when one is in trouble.”

How does the American character played by Ron Perlman enter the plot?
In Cuba we know many stories that have as protagonists a Cuban, a Russian and an American, and I tried to play with that. I was also attracted by the fact that the relationships between radio amateurs are not limited by language, political or cultural barriers, because what unites them is great solidarity in the face of problems, such as, for example, a natural disaster. Even today, with all the technological advances that exist, they preserve that same spirit of camaraderie.
What was it like to direct three actors who are not in the same place in the same scene in the film?
Very difficult and complicated. Hector Noa, Tomás Cao and Ron Perlman had to rehearse the sequences a lot, because during filming they were not going to coincide on the set. Thanks to that, during the filming they were very well prepared about action and reaction while they communicate through the radio.

Sergio & Sergei caricatures the actions of people who try to control the communication. What was your intention with this approach?
Sometimes people who take themselves too seriously end up like a farce, and I just wanted to draw a line between the things that I respect and those that I do not. For example, I admire what characters like Sergio, Peter and Sergei represent and the values they defend. But others I do not value in the same way. That’s why I decided in this film to address them by drawing that clear division between them. I was interested in exploiting ridicule to refer to what has done us so much damage, which does not mean that we underestimate those opportunistic people who live in different spaces of our society, but it is necessary to understand that their actions should not paralyze us because it is absurd and it destroys us. We must begin to see them as they deserve to be seen.

It is unusual to see young people put themselves in charge of the direction of photography in a Cuban film. In Sergio & Serguéi we see Alejandro Menéndez, only recently graduated from the Faculty of Art of Audiovisual Media (Famca) …

I have always worked with young people. My students have been part of my films. I have also felt the sadness of seeing many of them leave Cuba without having made a feature film. When I was filming Conducta I worked with a group from FAMCA, where Alejandro studied. He stands out among the most talented, and I did not hesitate at any time, despite the complexity of the film, in making him the director of photography of Sergio & Sergei. He also has something that I do not: a great command of new technologies. Really, his collaboration in that sense was fundamental, in addition to, as I already expressed, his great artistic talent.

Were you portraying Havana in a different way?
No, it is Havana that I always show in my films, which is how I see it. I have lived for 56 years in this city that I love. I may see it in a different way from other people, because I notice everything I know about it and I always try to make it my way. My way of framing it is not realistic, but romantic, nostalgic.

You started writing and directing for radio and television, until later you get to film making. How has that change been?
Very natural. In fact, I have rarely felt barriers or differences, although of course each format has its own peculiarities. I have also had the good fortune to have very good team mates, and I have even taken the same team many times from one medium to another; collective work that is successful is fundamental. In the future, Sergio & Sergei has many options. Its producers say it is due to be shown in festivals in Spain, China and Italy, and in Cuban cinemas generally later in the year.

Link to interview in spanish

Translated and edited by Google Translate and Cuba50

Watch the trailer with English Subtitles

Yesterday 15 April marked 60 years since the US military invasion of Cuba at Playa Giron/Bay of Pigs defeated against the odds by Cubans. Cuban artists at the time responded after the event with some powerful works. Some of the famous paintings are on show in Havana via a virtual exhibition by Raul Martinez, Mariano Rodriguez and Servando Cabrera. #Cubanart #cubanartists #PlayaGiron
Happy birthday today to brilliant Cuban jazz pianist and composer Roberto Fonseca. If you haven't checked out his album 'Yesun' do so now! Looking forward to live concerts in the future. Check out a review of his album last year https://cuba50.org/2020/01/26/cd-review-roberto-fonseca-yesun-the-album-i-always-wanted-to-make/
The International Day of Remembrance for the Victims of Slavery and the Transatlantic Slave Trade is commemorated every March 25, to pay tribute to all victims of slavery.
Cuban actor Mario Balmaseda has won the Cuban National Film Prize 2021. He has been a star of many great Cuban films such as 'One way or another' and 'The man from el Maisinicu' as well as a Brechtian theatre actor and dedicated to taking theatre to the remotest parts of the island.  #cubanfilm
To celebrate International Womens Day – meet ten Cuban women – actors, filmmakers, writers, musicians, dancers, directors – who have made waves in Cuban culture – but you may not have heard of.
On a day like today 20 February the wonderful Cuban singer Ibrahim Ferrer was born in 1927. He passed away 15 years ago but his memory lives on with so many great Cuban songs. He was a great singer of son but sang many boleros with buena vista social club. Which is your favourite Ibrahim Ferrer track?